This session came about because I have noticed lot of  relatively new Tweeters following me recently & also had to do a very quick “Twitter 101” of the basics for a colleague just starting to tweet. This started me thinking about what happens next, once people have started to tweet, know about @, DM and RT and have joined conversations. It seemed to be time to talk about Twitter again. Twitter is one of our recurring themes, we have had 3 former webinars on Twitter, two of them back in November of 2009 where we looked at managing your Twitter account for security in “Twitter – a clean nest” and Shelly Terrell gave us a session on using Tweetdeck. In 2010 we discussed whether there should be “rules” for using Twitter. So in this session we looked at Twitter just little beyond the basics of tweeting.

As usual we recorded the session (please let me know if you access it). There was a lot of discussion throughout – especially in text but also with audio. We started with a look at what people would like to take away from the session and moved on to where we were all coming from with Twitter. Most of us already had quite a lot of Twitter experience, but that some were very new to Twitter.

We moved on to look at desktop clients, using Twitter from a phone. I App Shared my own Tweetdeck for illustrating and discussing some of the planned points and those raised throughout. This included putting out a #SerendipEd tagged tweet to my PLN for their top Twitter tips that were instantly displayed in the #SerendipEd column on Tweetdeck for everyone to see.

The discussion moved on to lists, how we use them how others use them, the usefulness or otherwise of automatically generated lists. This moved us into a quick look at account security and management to reduce the risk of scams, hacking and phishing. 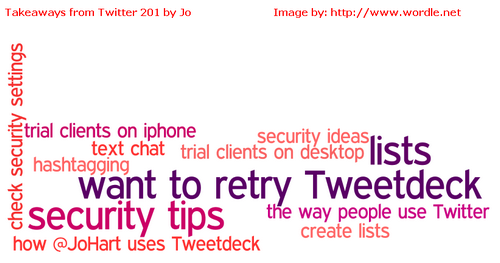 The last parts of the session were:

The “takeways” is always a really interesting question as it is sometimes the unexpected as in this session where the security aspect was the best “takeaway” for several people .

This session seemed to go extremely well despite my own doubts as always that it might be too “me centric”.  I always enjoy discussing Twitter and its potential because I use it so much and have gained so much from it in terms of establishing, and learning from, my own PLN.

Our next session is an Edublogs “Serendipity” session on Thursday April 28th at 23:00 GMT/UTC (Afternoon/Evening USA) or Friday April 29th at 7am West Aus, mid morning Eastern States Aus depending on your timezone (check yours here) – in the usual Elluminate room. This is one of our fortnightly unconference sessions where we invite you to bring along your “hot topics” and “burning issues” for our poll on the topic of the day. If you want to propose a topic in advance then visit the Serendipity Wallwisher and add your topic.