Facebook is used for social connections around the world, however it is also a great platform for professional development. Facebook has the capacity for you to “meet” others with similar interests and come together in “Groups” to discuss and share those interests. It is particularly important with Facebook that you understand and use your privacy settings so that you know who sees your posts. You also need to keep an eye on the Facebook settings because Facebook sometimes reverts things to defaults – especially what appears in your Newsfeed. 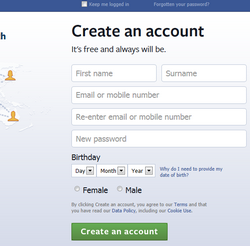 1. Go to the Facebook website and sign up. Facebook expects you to use your own name and this is the preferred option anyway if you are using Fb for professional development. I have a second completely separate Fb account (using my work email) that I use for any student interaction.

2. Once you have signed up it is important to complete at least part of your profile ideally including an image (avatar). There is much discussion about what is appropriate in terms of images. If you are using Facebook largely for PD then a photo is probably best, alternatively a cartoon image that you can create with a tool such as Mangatar.

There are many other educator groups globally and a lot of these are cross-sectoral, here are just  few:

For industry connections look up your own industry area in the Facebook search to find groups relevant to your industry.

I use one Facebook account for personal purposes and professional development. If you mostly use groups for your pd then your personal connections won’t get all your pd type posts. I use a second account to keep my student interaction separate and the two accounts are not “Friends” with one another.

It is particularly important with Facebook that you understand and use your privacy settings so that you know who sees your posts.

You also need to keep an eye on the Facebook settings because Facebook sometimes reverts things to defaults – especially what appears in your Newsfeed. If it doesn’t say “Viewing most recent stories” under the box where you type your post then you will be seeing “Top posts” ie the most popular. To correct this and see all posts from your connections go to the left hand column and look at the dropdown beside “Newsfeed” (top menu item under your avatar). Choose “Most recent” then you will see all posts from those you are connected to.

Your groups are listed on the left hand side, to see posts and to post in the groups you need to be on the group page.

This post is just about getting started and finding some potentially useful groups for professional development and networking. If you have any questions please  comment on this post and ask your question in the comment.

This was a very lively session! Great fun with lots of whiteboard contributions and text chat – we had several people without microphones so there was a lot of discussion in text. As usual the session was recorded – please let me know if you access the recording.

We started with a quick whiteboard brainstorm to share our own understanding of the term social media in a classroom context. This confirmed that we all had similar perceptions.

Then, very much in the spirit of Serendipity sessions we diverted briefly to explore a question raised in text chat – namely when we use social media particularly text based “do we do the quiet ones a disservice by always allowing them an out from speaking up?” The consensus was that we need both with a strong awareness that the opportunitiy to text can build confidence. As a shy child myself I was incapable of “speaking out” in class or anywhere else and trying to force me just made it worse, so I identify very strongly with those who “lurk” and prefer to text. I very much regret that such opportunities for interaction were not available in my childhood as I think they might have helped me to manage my shyness much sooner!

The next part of the discussion moved back to the main topic and we took a look at the strengths and weaknesses of using socisl media in the classroom. 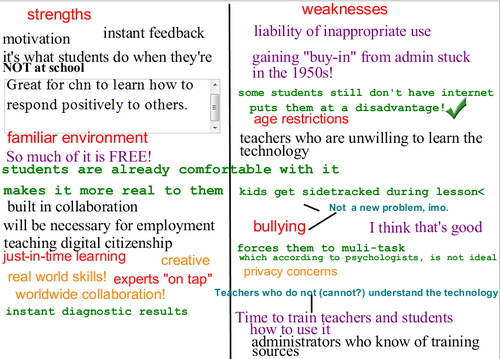 This whiteboard filled very fast with both strengths and weaknesses, giving us much food for thought and leading nicely into a very quick look at which of us are using social media with students at the moment and what tools we are using.

We then moved on to consider one of the eternal questions for educators – how we get others whether they be educators, admin or policy makers on board with tools and strategies that can be fully justified in pedagogic terms but are threatening in some way because they are new and challenge long-held and conservative perceptions of what teaching is about. Again we filled a whiteboard rapidly with the overall opinion being that demonstrating the use in some waythat includes the doubters is probably the most effective strategy

This was a terrific session – so many thoughts, opinions and ideas shared. Though as always I felt I talked too much! I think this happens more when we have people without audio because so much of the discussion happens in text and on the whiteboard so I tend to try and provide a commentary to link whiteboard and text chat.

Our next Webinar is an Edublogs “Fine Focus” session. This week in “Trouble with Timezones?” we will be discussing the issue of timezones,  sharing some of our own strategies for ensuring we don’t get event times wrong and that we can catch up with our global PLNs, and hearing from YOU about your issues and strategies around timezones. Join us on Thursday May 19th at 23:00 GMT/UTC the time for you will vary depending on your timezone (check yours here) Thursday afternoon/evening in the USA, late night Thursday in Europe, and Friday morning in Australia – in the usual Elluminate room

I have recently (in the last two weeks) initiated a Yammer network in my workplace. A few weeks ago in one of our Serendipity unconference webinars Yammer came up as one of the Web2.0 tools that someone was using in their organisation. As a committed Twitter user who has gained a huge amount both professionally and personally from my Twitter stream and how it fits into my PLN I thought that Yammer might be a good tool for my organisation. We are distributed over several campuses, people are often off campus for a variety of reasons and “corporate knowledge” is widely distributed and fragmented. A network such as Yammer provides opportunities to seek immediate answers to those quick questions we ask colleagues many times a day and to share ideas, information, knowledge and links about all aspects of our work.

To start with I initiated the network by signing up and then inviting four colleagues to join. Since then I have invited another three, and am about to invite a further three. My hope is that this will grow organically – I am totally convinced that trying to force adoption of this type of innovative (for many organisations including mine) approach to networking and sharing is counter-productive. Already several of my colleagues have invited others and at the moment we have 14 members and a further 13 who have been invited but not yet joined.

Only two of my colleagues are (to my knowledge) at the moment on Twitter, they are both new to it – and I am sure they won’t mind me saying that they are a bit apprehensive about networking in this way. When I started using Twitter I felt much the same way and it took me a while to “get into it”. However as none of my colleagues have used this type of networking strategy before I find myself “yammering” various suggestions and thoughts that might help people experiment, learn and ultimately enjoy this form of networking. So it seemd to me that it might be useful to post about these and then I can just use the link rather than filling the Yammer stream with all those suggestions on a frequent basis, so here are some of my ideas. These come largely out of my own experience with Twitter but with some modifications because in some ways an organisational Yammer network is very different from Twitter.

Tips for getting the most out of Yammer 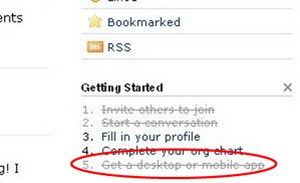 1. Get the desktop app – this is a narrow window with tabs that you can leave on your screen all day and it updates pretty much in real time. It doesn’t matter if you minimise it or bury it under other windows you can take the occasional look to see if anything of interest to you has appeared or if anyone has asked a question that you might be able to help with. YOU DON’T HAVE TO LOOK AT IT! Ignore it, hide it, close it – the choice is yours. At least it’s there if YOU want to ask a question!

2. Follow people – otherwise you will miss their yams unless you watch the “Company Feed” instead of your own “My Feed”. If someone follows you you don’t have to follow them back but hey why wouldn’t you? We all need each other’s knowledge and support. 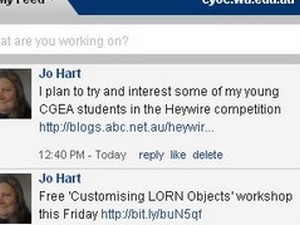 3. Participate – join the convo (conversation); start a convo yourself; share a link; share an idea; answer a question; ask a question. Participators usually seem to get more out of these kinds of networks than lurkers (those who just observe and take useful things from the network without contributing).

4. KEEP IT SHORT! no more than 150-200 characters is best, OK we will all go over that occasionally but don’t let it become a habitl The global network Twitter limits to 140 characters – teaches us to be concise J.

5. Remember the social dimension – it oils the wheels of the professional interactions! It’s not a hanging offence to say social things – we all say social things in face-to-face situations, online networks are no different. 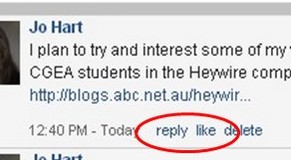 7. You can aim a message at a particular person use @ in front of user name (message is public) or use the user name without @ and the message is private

8. Fill in some of your profile info – not necessarily all of it but preferably include an avatar (pic or image to represent you) it doesn’t have to be a photo, any image that feels right to you is fine as long as it doesn’t offend others.

9. If you share a special interest with some colleagues make/join a group. Your messages can be public or private

10. If you want to give Yammer your best shot – remember anything new is hard at first. Give yourself a goal eg skim the stream at least a couple of times a day and post something at least once each day.

11. Invite someone else – send an invite to a colleague & learn about Yammer together.

For any Manager or Administrator out there who thinks that this is a time wasting toy and not appropriate for work – just a reminder that it can:

Yammer is what you want it to be and what you make it for YOU!