The Edublogs Online PD session last week (5/11/09) was about Twitter. I have over the last few months  noticed waves of spam, phishing and account hacking suffered by members of my PLN on Twitter. I also became aware (when @lasic tweeted and I think also blogged – although I can’t find it – about this a few months ago) that many people were unsure of what they could do to limit the impact when they or someone in their Twitter stream was attacked.

So looking at this seemed to be something that would be useful to quite a lot of people, including both those who have been Tweeting for some time and those fairly new to Twitter. It was a great session with a huge and very productive parallel channel in the text chat as well as the presentation and related interactions.

The session started with a look at how we handle followers and a poll indicated that around 2/3 of the people present at the beginning checked for new followers frequently. They also had some criteria for deciding whether to: follow back, wait and see, or block/report spam. The remaining third did some checking but had less clear criteria and only occasionally blocked anyone.  Personally I am quite active in how I deal with new followers. I check very frequently and block quite often – I apply this to anyone I am unsure of or who starts the alarm bells ringing in my head. I make a conscious effort to keep my following list relatively small, so I don’t necessarily follow back everyone who follows me. For example I rarely follow anyone who does almost all retweets or who just tweets their blog posts or who does nothing but links. This is a very personal preference and I do it because I feel that the social interaction oils the wheels of the professional relationship and this is important to me personally.

We shared strategies for determining how we decide whether to follow someone. Some of those that several of us had in common were: checking out profile, avatar, follower/following ratio, recent tweets (number, topics, style, type), and their follower list. Other suggestions from chat and the whiteboard included: membership of other groups in common, “meeting” in another context (face to face or electonically, using Topify, using Twitter-gardening, using Tweetdeck’s new followers column and when they joined vs how many they follow.

There were a range of characteristics that started new follower alarm bells for some or all of us including: any provocative content, following excessive number vs followers, zero/minimal tweets, heavy marketing, self-styled experts/gurus, anything free/secret or guaranteed to …. Additional suggestions included automated tweets, social media specialists and real estate.

We also talked about reducing the number of irrelevant followers generated when we use a keyword in a Tweet. Many of these are automated searches that autofollow anyone who puts their search word in a Tweet. Some of the main ones include words like spam, sex, love, names of celebrities, major sports, cities, countries. While the last few may only attract one or two followers for example a tourist centre, the earlier ones can attract a flood of very inappropriate followers. A strategy that seems to work for me is replacing one or more letters in the word with a character such as “*” very much in the style that was used in print in an attempt to reduce the impact of possibly offensive words.

I find managing followers much easier than when I first joined Twitter a year ago. I use mainly my Twitter home page on the web and Tweetdeck for all my Twitter interaction and management, and in my opinion each new version has made dealing with new followers easier.

To illustrate this I shared my Twitter page and quickly blocked a new follower (not the one above) that I was doubtful about. There was some discussion about reporting spam, again I have a very personal opinion that reporting is useful because the more people that report a dubious Tweeter the more likely that Twitter will take some action.

My own feeling is that managing my Twitter stream actively helps to reduce both the risk to me and the risk that people who follow me will be attacked through me.

How to recognise an attack and what to do.

The discussion then moved on to recognising and dealing with an attack. Being aware of the style and type of messages sent by your followers is one way to recognise a probable attack. One of the most common attack types is to hijack someone’s account and then send DMs in their name that perpetuate the hijacking. I am immediately suspicious if I get an unexpected DM from someone in my stream that falls into one of these categories: doesn’t relate to a recent topic; points me to a link with just a general comment eg “Look at this” “Is this you?”

In my opinion it is important that we tell anyone from whom we get odd DMs. Once your account has been hacked it is quite possible for a DM to be sent in your name without your knowledge. If we simply block anyone who sends us an odd DM then the attackers win because they are curtailing our use of Twitter. It’s also helpful to others if you warn the rest of your followers when you get a suspicious Tweet. This is particularly helpful for people who are relatively new to Twitter.

If someone tells you that you have sent odd DMs then it is likely that your account has been compromised and that someone has access to it. This may have happened as a result of your participation in one of the games, toys or gadgets you have accessed from Twitter, many of these ask you for access to your account, not all of them are legitimate and even those that are may themselves be hacked. If you have this problem just changing your password is not enough as you have already given these third parties access to your account.

To check out who has access to your account you can go to your Twitter homepage and look at the Connections Tab in Settings. When I put this slide up during the session it gave rise to a sudden silence in the text chat causing me to worry that my sound had dropped out. Of course what had happened was that everyone had immediately gone to their Twitter page to check out access, and several were busy revoking access for suspicious applications. 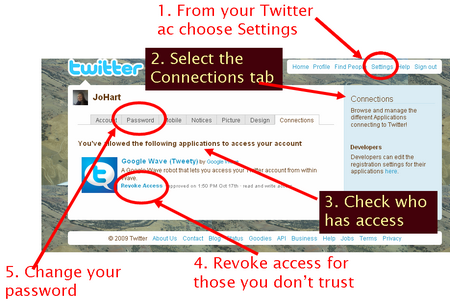 If you don’t have a connections tab then you have not given anyone access to your account. Personally if I get a suspicious Tweet from someone I follow I tell them and also usually suggest they try the above.

A great source of information on what is currently happening in the way of problems on Twitter and of fixes for problems is to use the Help on your Twitter homepage as this takes you to Support. There you will find a range of information including FAQ and links to the Twitter blog. I have found this really useful when strange things have been happening on Twitter and it tends to be my first port of call when seeking solutions.

We had a great session and I think we all all learned a lot from one another – and that is the purpose of our sessions! Learning together, learning from one another is just the best professional development there is.