We had an interesting issue before we started the most recent Edublogs webinar “Teach to the Test?” in that we were “hijacked” by at least two and more likely three or more quite disruptive children (or at least they purported to be, and sounded like, children). One gave “her” age as “seven” and another gave hers as “ten”, at least one of them seemed to be using an alias and also logged in at one point as “KILLLER”. Luckily we identified and dealt with this largely before the session started and were also ready for any additional invasions during the session.

This sort of occurrence gives food for thought and raises some questions. For me my main thought was about how several children had got the link on this occasion when this has not happened in any of our sessions before. The link is posted in a variety of places (three events calendars) and is also Tweeted out (and often retweeted) several times just prior to the session. So perhaps it is surprising that this has not happened before rather than surprising that it happened at all. The voices were very “young sounding” and in my opinion the accents were North American. I have a concern that these quite young children apparently had sufficient access to enable them to join a live adult session with no supervision and that this could pose a risk to them in the future.

Would you recognise/identify non-appropriate participants? How would you deal with them and with behaviour that disrupted the session? It was something I was already very well aware of as a possiblity because some of my students are “Youth at Risk” and may have behavioural issues that manifest in face-to-face situations. So I had already thought of some strategies for identifying and managing potential problems of this type when thinking of transferring some of these students to an online context.

Thankfully Elluminate has some features that make it a bit easier to deal with issues of this kind (look out for a post on this soon). Moderator control over access to tools is very useful and as a moderator it is also possible to remove someone from a session, although unless you block access to all new participants you can’t stop them joining again. Blocking access to all is not an option for me because we have people joining throughout sessions. This might be something for Elluminate to consider – perhaps when someone at a particular IP address is removed then to not allow that IP address to rejoin for 2-3 hours.

Identifying that these participants were not really appropriate was probably relatively easy in this case because two of them were in the room very early and were talking at times. Also one had started video with the camera pointing at their body rather than their head. On hearing the voices I was alerted as they sounded very young. I removed video access and then spoke to them but did not get a proper response. They then started to draw on the whiteboard, my instant response was to remove their access to whiteboard tools and to say this was because we were loading the presentation. I had no wish to offend legitimate participants who were just experimenting because I am happy for people to do this. The immediate response was variations (in audio and text) around a theme of asking/demanding to be allowed to draw with one very rude response to the effect that “you must die!” (if you don’t let me draw). I then removed audio permission. At this point we were joined by Shelly Terrell who has Elluminate experience. I told her of the situation – we agreed that the children should be removed. I did this and then gave Shelly moderator status to help me deal with any further issues. She provided fantastic support for the rest of the session, when we again had these or other children joining.

As a further strategy for monitoring and identifying any children I was then a liittle more pro-active than usual in encouraging participants to tell us about themselves and what they did either in text or by audio.

We had one apparent child who remained quiet and to whom we gave the benefit of the doubt – ie we didn’t remove her because she was causing no issues. She chose to leave on the basis that the session was for “grown ups” and a bit weird so she would like to find one for “kids”.

This in itself raises another issue – should we be doing sessions that are aimed at including very young students, but in a planned way? I have run sessions where I moderate (from elsewhere) physical rooms of people who are all in Elluminate with only one microphone available to each room through a “room moderator” but where everyone has access to text chat, whiteboard, polling etc. Alternatively I have used Elluminate in group sessions where no-one has microphone because we are all in the same room but where we use the Elluminate features. I find these strategies are great ways to get whole group participation in a large session. In my opinion they would be an excellent way to introduce children to virtual classrooms, and if anyone would like to give it a go I am happy to be your distant moderator (if we can do it when my timezone is awake!)

Please comment as I would love to hear your thoughts and ideas on any aspect of this post.

An occasional issue that I have found arising with Elluminate is when one of the tools or modules doesn’t work properly. If this happens you may find that emptying the Java cache solves the problem. This is also a potential solution to any situation where Elluminate seems to be “behaving” oddly. I have found it to be a good initial troubleshooting activity when students encounter any problems as it is quick and easy to accomplish.

To empty the Java cache (from a windows operating system), close Elluminate if you are currently in a session.
i) Go to Control Panel (switch to classic view)
ii) Find Java and open the Java control Panel
iii) Select the General Tab
iv) Ensure that the space for temporary file storage is set to 1000 MB
v) In “Temporary Internet Files” select Settings
vi) In “Temporary Files Settings” click on Delete Files
vii) Ensure that:
Applications and Applets
Trace and Log Files
are both ticked
viii) Click OK 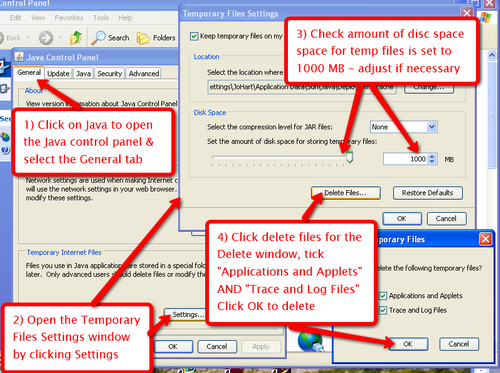 ix) Close down and then restart the computer – it may take some time to reload all the Java files when you restart and re-enter Elluminate.