This overview is for three webinars – two Serendipity sessions and a FineFocus about “what isn’t taught in school”. 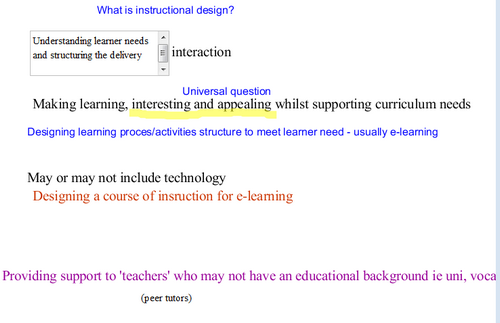 “What most schools don’t teach” – a FineFocus session

This was a session where I was unable to be present – I logged in but was unable to stay due to work commitments. So this is one of those recorded sessions where I needed to access the recording to find our what happened! This was a very small group so was more in the way of a two way conversation than usual.

One of the things that most schools don’t teach is coding! Those of you familiar with our webinars will know that my co-facilitator Phil is a programmer as well as a teacher. In this session Phil shared some ideas about the uses of teaching students to code. These are not just their resulting ability to write programs! However

I personally have some reservations about everyone learning to code – analysing systems and developing algorithms is one thing but writing good clean efficient code is very different. I think there are risks involved in that as is currently the case with building websites everyone who has learned by “playing” with the tools thinks they can do this to professional standards. The result with websites is many very poor quality websites built for organisations by amateurs.

Serendipity topic – the loss of GoogleReader

As always in Serendipity we began this recorded session with a whiteboard for topic ideas. The news that Google is to close GoogleReader was at the forefront and was the chosen topic.

This is the second Google product that I use personally where closure has been announced relatively recently, the previous one was iGoogle (due to close in Novemeber). In the light of this our first whiteboard was an opportunity to think about whether we, as individuals, have too many eggs in our Google baskets. 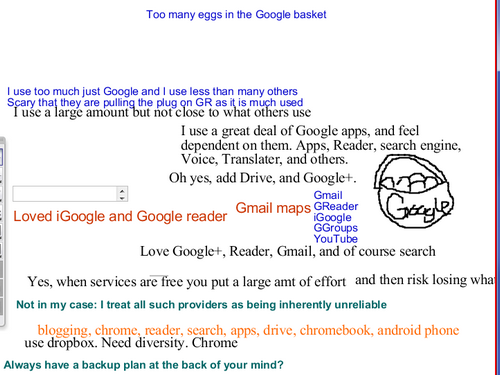 The consensus was that on the whole we probably do tend to use too many tools/apps from the one source. We considered briefly the “why?” and it usually comes down to convenience. You only need one login for your GoogleAccount and also the tools/apps often enable cross linking and cross posting to occur fairly seamlessly.

Links for a number of possible alternatives for GoogleReader were shared and we also added alternatives to some of the other Google tools/apps. Main takeaways from the session were that there are alternatives – we just need to look even though changing is a pain!

Three very interesting sessions with lots to think about. The Serendipity has given rise to the next FineFocus topic which will be an opportunity to share and explore some possible GoogleReader alternatives

Our next Webinar is a FineFocus session. Join us for “Replacing GoogleReader” in which we share and explore some possible replacements for GoogleReader. Join us on Thursday March 21st at 23:00 GMT/UTC the time for you will vary depending on your timezone (check yours here) Thursday afternoon/evening in the USA, late night Thursday in Europe, and Friday morning March 22nd in Australia – in the usual Blackboard Collaborate virtual room.