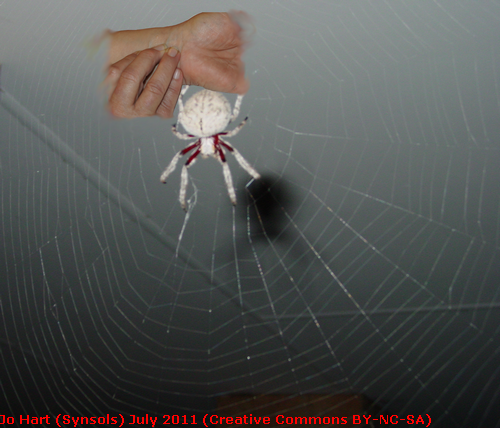 I seem to have been talking about iGoogle a lot over the last year and will be continuing to do so as I am delivering a Professional Development session on it for colleagues in a few weeks. The ever increasing flow of information across our desktops generates a need for some way of handling and drawing together the threads.

This was a great session for me and hopefully also for those participating. After  a bit of scene setting we started with a poll on how familiar participants were with iGoogle and then a whiteboard for sharing ideas about what exactly it is! I also asked for people to share on a whiteboard the five main strands of their PLN so that I could get a feel for the gadgets needed by the majority – these were fior  Twitter, Facebook and Google Reader  all of which I already had on my iGoogle page. 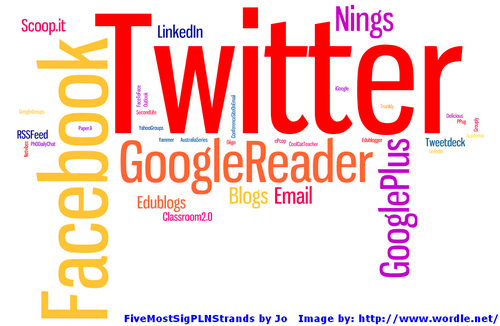 Then it was time to tell the story of how I came to use iGoogle as my PLE hub to bring together the strands of my PLN. This introduced the main part of the session which was a “show and tell” using Application Share to share my iGoogle page and talk about:

I found this really exciting because as I was sharing people were opening and exploring – sometimes “dusting off” their own iGoogle (or in some cases starting their own iGoogle ac). This made the session very participative as there were practical questions coming through text chat – including as always at least one I couldn’t answer about making tabs public.

We finished with “take-aways” these are always fascinating for me because they are so varied and illustrate so well how different we all are in our perceptions and understandings. This time (very pleasing for me)  there were many intending to experiment with iGoogle as a possible hub for their own PLN.

I really enjoyed doing this session for several reasons.

I’m already looking forward to the next event and would like to finish this post with some thanks! Firstly many thanks to Denise (@mrsdkrebbs)  for being a fantastic Moderator for my session. Secondly a huge THANK YOU to ALL the organisers for their tremendous contributions to the smooth running of the event – in many cases behind the scenes. Thirdly very special thanks to Shelly Terrell (@ShellTerrell) (she who needs no sleep) and Clive Elsmore (@CliveSir) (master of timezones) for their stamina and overwhelming  committment to making #RSCON3 such a success.

I was ruminating a couple of days ago about how learning, and teaching, have changed in so many ways since I was a scruffy kid at a small rural grammar (high) school in the UK over 40 years ago.  Even subjects such as chemistry and biology were taught largely by “chalk and talk” and “read your textbook”. The occasional inclusion of “a film” was just that with a projector and a large reel of film. Even more rarely we migh have the opportunity to watch a BBC Schools programme on a grainy black and white screen as it was being broadcast.

Anyway enough of the reminiscence! What was really in my mind was how all of my teachers when I was young were definitely “specialists” they taught in their own (usually quite narrow) field, and were never asked questions or expected to know anything about anything else. I think I have had a “bee in my bonnet” about specialisation since those days. Even then I saw connections between subjects that others seemed unaware of and I found it intensely annoying that everything was compartmentalised. 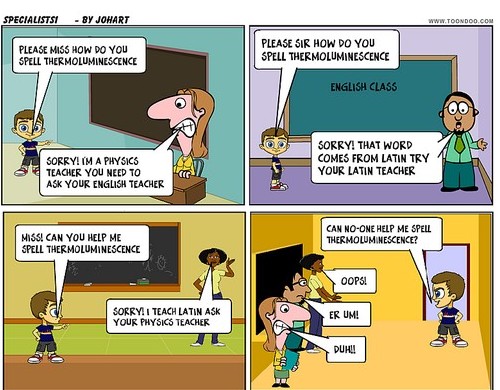 It seems to me (and this is purely my own opinion) that for most of my life (until about the last 12 years) there has been a huge emphasis on specialisation. People have been encouraged for a long time to “know more and more about less and less” whether it be the works of a particular author who wrote two books or the lifestyle and physiology of a minute insect. I have always found this type of very narrow focus almost impossible for me as this degree of specialisation often seems to exclude the broader context in which the subject is set. It also (from my perspective) tends to diminish the opportunities for cross disciplinary input.

As one of those people with polymathic tendencies – and I am using polymath in its sense of varied (cross disciplinary) knowledge rather than in the sense of knowing a vast amount – I have often felt that I am labelled in a number of ways. Some of those labels that have been applied to me over the years are: “having a magpie mind” in the sense of remembering a lot of unimportant “glittery stuff”; “butterfly minded” ie flitting from subject to subject; “academic lightweight” with its implication that just because I have not chosen to “pile it higher and deeper” about one topic I therefore lack the capacity to do so!

My perception is that it is now more acceptable to be a polymath than it has been for many years. The ruminations that gave rise to this have also led me to wonder on the validity of this perception and consequently why this might be so. The first instant thought was that this is a result of the exponential growth of easily available information through Internet publishing and increased access. In my opinion the skills of a generalist and synthesist (often held by polymaths) are better suited to a burgeoning information situation than are those of a specialist. There is also the additional point that, with increased access to information, specialists are no longer the exclusive curators of detailed knowledge and information. Perhaps this is why (in my opinion) polymathy (and respect for it) is on the rise. However it may just be the usual cyclic nature of change – there have been other times when polymathy was common. Both the Renaissance period and the late 19th Century stand out in the number of polymaths who were high achievers in more than one field.

Finally, all I have written here is just “my take” I have no supporting evidence for any of these thoughts and opinions – just my own feeling from what I see around me and in my PLN. So my perception of a rise in polymathy is just that. As always, I would be most interested to hear your point of view.