Warning  – this is not an e-learning related post :). As some of you know I sometimes digress into posts about the wonderful part of the world where I live and some of the activities on our block. This is one such post. However it was triggered by a tweet to me from a long time Twitter buddy @plangardengal in California who was one of my earliest contacts on Twitter around three years ago. We have talked gardens, food, animals, and education on Twitter so she knows we have ducks and was looking to talk about some “whys and wherefores”.  Most of this post was the email I sent to @plangardengal – it was really just meant to say “ask away if I can help I will” but as always my fingers ran away on the keyboard and I found myself telling the tale of our ducks. 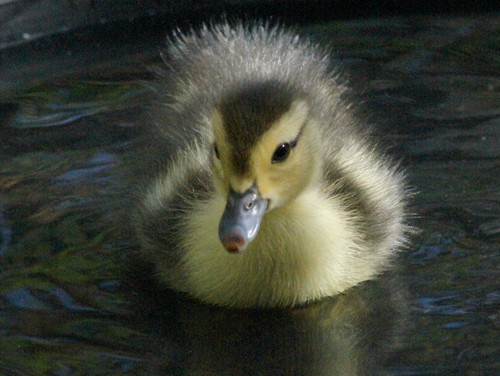 Again a warning – this is not for the really faint-hearted we do have and breed both “chooks” (chickens) and ducks because we like the meat as well as the eggs and because we like to eat birds that have had a happy life! We started with the “chooks” and a couple of years later added the first ducks to the “flock” again for eggs and also to eat. It seems that here ducks are better “natural breeders/incubators” than the chooks. We use the incubator for chooks but ducks sit and manage their own incubation.

Our original ducks are Muscovies – great layers *huge yolked eggs” tho’ the shells are very hard! These ducks are great characters as well as being larger than the average domestic duck. They can crossbreed but produce infertile offspring when crossed with other breeds. Their incubation is stated as 35 days (having said that our main breeding Muscovy duck takes 38-42 days!) 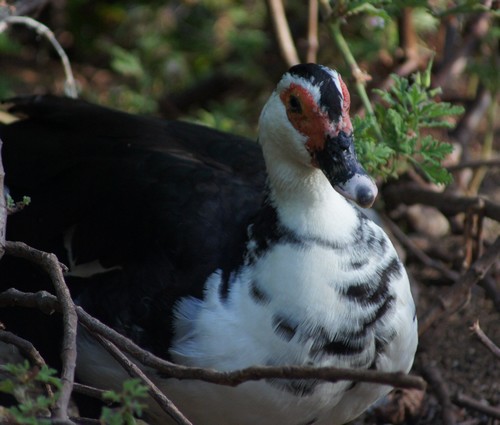 We absolutely love our Muscovies! They are not only good layers, breeders and tasty eating but are also great characters. Their  temperament is also excellent – calm (as birds go), very non-aggressive and totally relaxed in human company except when protecting eggs. Our first drake was a bit confrontational and bullied the chooks a bit so we swapped him for a better natured one though much older one. Some of our Muscovies are great escape artists – they fly over, climb over and wriggle under the internal dividing chook wire we have in the garden and to divide the chook pens up. So ideally they need fully enclosed runs or you need to fence the veg in as they love to eat emerging young veg!

One of our original bought in birds is our main breeding duck – a fantastic character (Pudddleduck – named for Jemima Puddleduck of Beatrix Potter stories – we don’t name the ones we intend to eat!). She scorns the nest boxes, chooses her own spot – lays and hatches very well (11 ducklings – from 12 eggs – 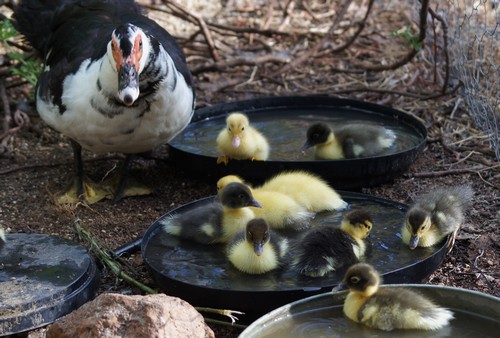 about 3 days ago & this year another 18 previously over 3 hatches). One of her offspring from earlier this year has also just hatched 4 ducklings (she was only sitting on 5 eggs so that is a good hatch too). At the moment we have two drakes – both are Puddleduck’s offspring and both have now proven fertility with these two recent hatches. We plan to stay with two ducks and two drakes though we really only need one drake, having two reduces the risk of being left “drakeless” if (as happens with all poultry) one suddenly dies.

We also now have Khaki Campbells. We were given 8 fledgling “drakes” one of whom was a duck – so kept her & one drake – they have already bred 8 ducklings. Their incubation is supposed to be 28 days, and as I write Mrs Campbell has just hatched 3 more ducklings. This was a great surprise as we had not expected any success from this batch as we believed that the young from the previous hatch had been sleeping in the nest (before we took them away) and had probably started the eggs into growth prematurely before the duck started to sit. 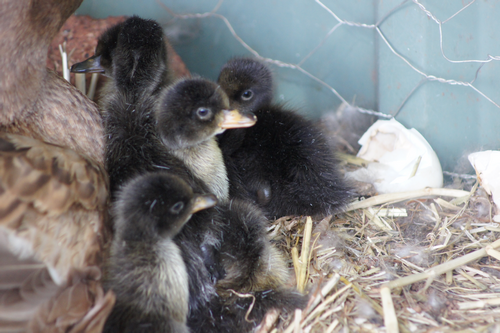 The Campbells are very different characters from the Muscovies – again great eating and good layers but the two we are breeding from are very nervous in temperament. The group of 8 were all like that – stayed together in a tight bunch all the time, rushed around making lots of noise and kept as far away as possible from humans. These two have calmed a little but not much. We separated off the young (who were showing similar characteristics) when they were a few weeks old and put them in a pen with young chooks. This seems to have had a very good effect in that they no longer rush around in a bunch and they are much less scared of humans. All of our home-bred chooks rush around us and walk on our feet if we are anywhere near them and this influence is being passed on the the young ducks.

The ducks and chooks are all wonderful characters and very entertaining to be around. I was picking figs this morning with several chooks hovering hopefully round my feet in case I should drop a fig when I heard flapping of wings from the other side of the tree. I went to look and found one of the chooks jumping (wing assisted 🙂 ) to peck at figs on the tree around a metre (just over 3 feet) from the ground! Now I understand why we don’t get many figs on the lower branches. These and similar antics by both ducks and chooks lighten our days and help us keep perspective in the stressful world of education.