I try to take a short walk around the block fairly early most mornings. Often this doesn’t happen because I need to work. However this morning I decided I needed a walk!

I always carry binoculars on my morning walks because this is a good time for birds and I am doing my best to catalogue the bird species I see on the block. Usually I leave my camera behind because it is just another thing to carry and taking reasonable pics of wild birds (especially as most of them are small) is just not going to happen.

This morning I really wished I had taken my camera! My walk took me up what we call “the pipe run”. This as the name suggests is a route where we have a pipe running from the bore about a hundred metres through the bush to the bore water tanks. The pipe is only about 5 metres into the edge of the bush from the firebreak on the northern edge of the block. As I walked beside the pipe I heard movement so I stopped and saw two of the recently released kangaroos slowly moving deeper into what is a fairly narrow wedge shaped strip of bush. I continued slowly and at the end of the pipe run I turned right onto the track between the bush and the top paddock.

As I walked past the bush towards the paddock gate there were three kangaroos on my right in the edge of the bush. Two of them moved quietly away into the bush but to my great surprise the third one came towards me. I stood still and put out my hand, the kangaroo sniffed at my hand and seemed to decide I was “mostly harmless” and allowed me to stroke it. None of our regular visiting mob would come this close except at the one spot on the block (near to water) where they can sometimes find hay. So this is definitely one of the new release – and obviously one who hasn’t yet lost the “humans are friendly” response from being raised by people. 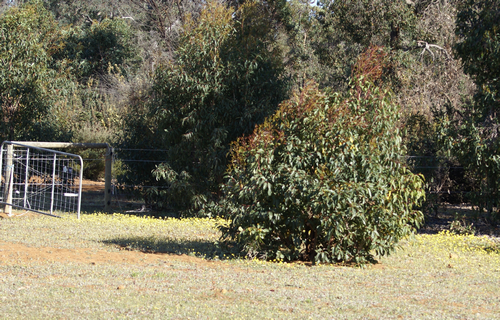 From about 15 metres before the paddock gate the ‘roo accompanied me on the rest of my walk – around 600 metres through the top paddock and back down to the house beside our other patch of bush. 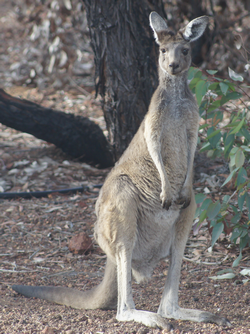 Luckily as I neared the water trough Phil was outside the house so I asked him to bring some green from the garden. The ‘roo ate some of this from my hand and then discovered some nearby food mix (we are still putting out a little transition food). This gave me the opportunity to go inside and pick up a camera so I was able to take some pictures of my companion. 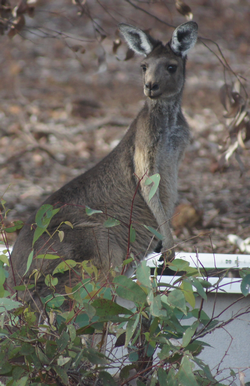 Although I didn’t discourage the ‘roo from keeping me company today I think I will have to do so in future. Kangaroos that hop calmly up to humans are at great risk to their lives as not everyone enjoys having them around. They are regarded by many farmers as a pest. Because of this we have made considerable (successful) efforts not to encourage our regular visitors to become too tame.The only place we are able to approach them is by the water supply we keep full for them. Anywhere else on the block they just disappear into the nearest cover.

As I write this there are fourteen kangaroos outside my window. They are a mixture of some from our regular visitors (2 females with last year’s joeys still in attendance and this year’s young in the pouch) and the newly released group. There is a bit of occasional squabbling but not much. The two mature females are quite assertive about their personal space and also still protective of their joeys. Also there seems to be still some “pecking order” being sorted out with the new group. So thus far it seems that our hope that the groups will mix and the new ones will eventually become part of the mob is more likely to happen than not!

This session – recorded as always was a FineFocus session in which we took a learning styles by exploring some of the online learning style inventories available and discussing their usefulness.

We started with a couple of “where are you coming from” type questions. These elicited that we had all at some point both completed an inventory ourselves and also used one with students. 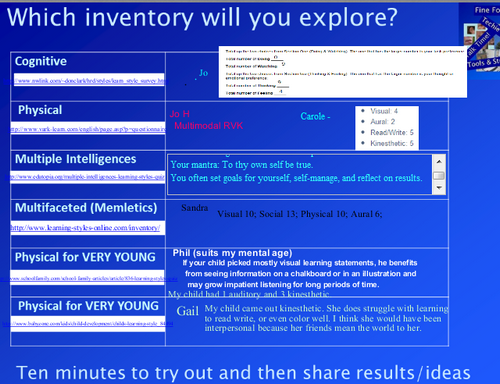 The next part of the session used polling to look at ease of use for the inventories and the ease of obtaining useful information from them. This was followed by consideration of:

We finished up with an opportunity to share our own preferences – several links had been shared earlier via text, a look at our “take-aways” from the session and some quick feedback!

Overall this session was fun – because we all had prior knowledge of Learning Style Inventories we were able to discuss them in more depth than if they were new to most of us. Also it is always very satisfying to go and try something out during a session and share the outcome. Most people enjoy finding out something about themselves and this session gave us the opportunity to do so!

Our next webinar will be an Edublogs “Serendipity” session on Thursday April 25th at 23:00 GMT/UTC (Afternoon/Evening USA) or Friday April 26th at 7am West Aus, later in the  morning Eastern States Aus depending on your timezone (check yours here) – in the usual BlackboardCollaborate room. This is one of our fortnightly unconference sessions where we invite you to bring along your “hot topics” and “burning issues”. We post these on the whiteboard and then choose the topic for discussion by poll.