I never cease to be amused at how parochial we all are at times despite our global connectedness. For example when I began doing Edublogs webinars about a year ago I gave the times (and stated that this was the case) in Western Australian (WA) local time when Tweeting about the sessions. However great chaos ensued for several reasons:

1. Western Australia was at the time undergoing an experiment in operating daylight saving time in summer (not having used this in previous years)

2. The rest of Australia and the rest of the world seemed unaware of this. Indeed why should they have been aware? After all in the great global scheme of things Western Australia equates to “the lesser fashionable end of the Western spiral arm” in galactic terms. Thanks to Douglas Adams in his “Hitch Hikers’ Guide to the Galaxy” for that wonderful phrase!

3. Dates of change to and from daylight saving are not the same globally

Now I had just not thought through the implications of synchronous global attendance at anything. No excuse really, despite being an ex-European with a very strong awareness of global timezones as a result of regular Skype calls to the UK, I was thinking and acting parochially! Hopefully I now think and act more globally I have a World Clock gadget on my iGoogle page with a scatter of world times. 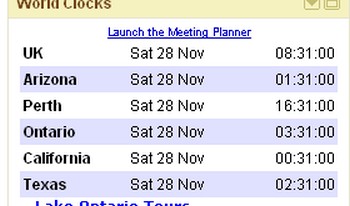 These are enough to give me some idea of the approximate time anywhere because they are distributed around the globe and anywhere else will be similar to one of them or between two of them.

The Edublogs Free Live Web Events page uses West Australian time in its calendar. However there is a World Clock Meeting planner link  to enable people convert for their own timezone. Alternatively there is also information on how to add the Edublogs calendar to your own Google calendar where the events will then show in your own local time.

After some thought I decided that as there was already a time standard in existence  that was what I should use in Tweets or other references outside the Edublogs calendar. So I began using Greenwich Mean Time (GMT)  although also including the abbreviation for Coordinated Universal Time (UTC). GMT still appears to be more widely known, and using UTC can give rise to further confusion about the date.

When I am Tweeting about sessions in the preceding few hours I usually clarify by adding a “countdown” for example “starts in 1 hr” however I find this can also be fraught with problems when some of my very busy PLN re-tweet in a hurry much closer to the session, don’t notice the time of the original Tweet and so don’t update the “countdown” time.

What started this whole reflection about timezones and our global vs parochial attitudes was an opinion from someone in my PLN that I should be using USA Eastern Time for the times of the Edublogs sessions. The reason given was that more people would then attend the sessions. My thought was “Hmm! Possibly more from that particular timezone. However in adopting and largely sticking to the use of GMT/UTC I am trying to be consistent and much more importantly from my point of view to think globally and use an internationally recognised timezone standard so that we are not seen to be favouring one timezone above others. From very early on we have had global participation in our sessions and my main objective is to keep the sessions global because in my opinion the exchange of knowledge and cross-pollination of ideas that happens when we have participants from around the world is the most exciting thing about our sessions. The recent change of session time to two hours earlier (2300 GMT) has meant increased European participation (midnight is a more realistic option for most people than 2am). In my opinion this improves the balance of participation and thus leads to the expression of a wider diversity of ideas and opinions.